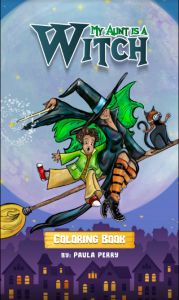 The best birthday gift that I can possibly give to myself, the announcement of my new children’s coloring book game, My Aunt Is A Witch.

The book is based on my imagination and interpretation of the concept of “that some things may not always be what we expect for them to be.”

In this funny Halloween story, Jonathan is disturbed by stories told to him by his mother about his aunt Karen being a witch, and he’s frightened to no end; he’s convinced the stories are real.

Real witches ride around on broomsticks. They wear black cloaks and hats. They are wicked, cunning, hateful women who disguise themselves as being friendly, ordinary ladies. Believing that his aunt might be a witch, his thoughts turn to fear the split second his mother drops him off at his aunt’s house for a night of Trick-Or-Treating.

His hideaway in the kitchen will be a safe haven until he suspects she will cook him in a big black pot. And there resting in the corner is the witch’s broom.

The book includes a secret recipe, a coloring book, and matching full-color illustrations.

This book is available at writersblockproduction.com
Amazon.com
AllAuthor.com

We will post updates for the release of the game, and links for testers as well.